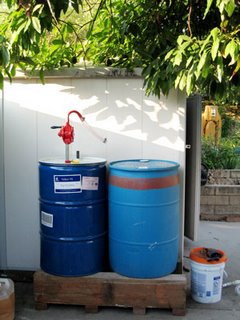 I''m in the process of finalizing my filter setup now that I have a vehicle to fuel. My first 2/3's of a tank in my car was new oil I purchased from Costco. I had previously collected some used oil from the caterer at work but only about 15 gallons of it. I figure that I willeventually find a source for my oil

When I started this project the thing that was so hard to comprehend for me was how to go about the filtering process. It seems there are many ways to approach it - gravity, heated, pump, & more. Climate can be a deciding factor as can the amount of fuel that one needs. The fact is I do not need that much oil as I don't drive much and the Jetta 5 speed gets fantastic gas mileage(epa 42/49). On average I only fill up every three weeks. That is only 20 gallons a month.

After I realized that I don't need that much oil (having obtained 2-55 gallon drums), I thought I could get away with using only 1 drum. My first batch of waste oil (from work) I simply filtered by pouring it through a short 5 micron sock into a 5 gallon bucket from the oil cube. This approach was OK because the oil had settled several weeks & was only used once so it wasn't that dirty. It was also good because the quanities match - an oil (cubie) is 4.6 gallons and I was pouring inot a 5 gallon buck. I then poured the 5 gallons into the 55 gallon steel drum to store the clean oil. I then used a Harbor Freight hand pump that I fitted with some tubing and pvc pipe to make a dispencer to fuel the car.

However, the more I thought about it the more the 1 drum scenario would not be very practical. I needed a storage tank so fuel would be available when needed and I needed to Dewater. The basic rule is (and this leads to the need for a filter station) the oil has to settle. I also didn't want a bunch of "cubies" lying around in my backyard. If I was going to pour from the cubies I would be disturbing the settled muck on the bottom more then if I had used a pump. I read on the forums about people using 1,2, & 3 drum filtering systems.

My biggest concern though was the need to dewater or at least set it up so it just happens. I believe there are different views on how to dewater I'm leaning towards the heat & settle camp. I found this thread & this one very informative and I based my set up on them. As mentioned I live in Southern California and it is summer (hot) as I'm starting this. I believe that the drums will dewater if let to heat via the sun and settle. I plan on adding the pipe heater and insulating as it turn to fall here. The idea is the oil will heat during the day and cool at night. The heating lets the water settle to the bottom and the cooling keeps it there by seperating it and unless distrubed it will stay on the bottom.


I'm just starting to construct this but this is how I plan on doing it with more photos to follow. 2 - 55 gallon drums (1 plastic / 1 steel - no reason just thought I'd try one of each)

I'm putting a bulkhead fitting on each on to drain the sludge from the bottom, if I don't get around to empting them. I bought the bulkhead fitting from McMaster.com as recommended on the forum.

I've elevated the drums slightly and I'm going to install a 25 Micron sock filter int eh first drum. I will then install a 10 Micron "GoldenRod" polishing filter on the hand pump as I pump the oil to the next drum. As it enters the next drum it will go through another sock filter - 5 micron. Then I will add a 2 micron filter to the pump that pumps it into the car.

Technically I don't have to do this because the Vormax only requires oil be filtered to 70 when put into the car but filtering more can't hurt and will make the on board filters (10 & 2 micron) last longer.