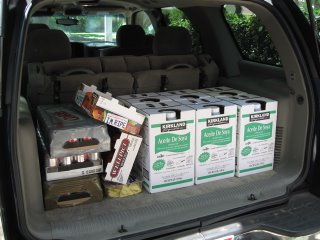 What about new unsed oil


I've seen this question asked in the forums. Some people have reasoned that if I don't want to deal with collecting, filtering, & dewatering waste oil can I not just buy new oil and use that instead? The answer is yes with some caveats.

First, there's the cost. I just purchased some new oil (July '06) because the waste oil I collected needs to settle. If I did my math right it works out to $3.17 gallon. The day before I filled up my dounut tank with diesel for $3.23/gallon. Here's the math:


So unless you are doing it for the planet, domestic renewable source, and greenhouse nuetral - all terrific reasons - the kit will never pay for itself.

Second, dewatering. Some folks on the forum say that the amount of water found in new oil varies widely. So you should probably test for water and dewater it if needed. The new oil I purchased at Costco has little to no water in it.

Third, and something I haven't looked in to much is degumming. Evidently degumming happens when the oil is used (heated) for cooking. According to a post I saw on the forum, oil should be degummed. How important that is I don't know. I'm not going to pursue it too much because I plan on switching to WVO soon. I have noticed that there are people out there that use new oil for various reasons. I am currently using new soybean oil until my WVO is ready

After my conversion was installed my first tankful was 9 gallons of new soybean oil. Plantdrive (the kit manufactuer) suggest new oil for the first tankful. I think this is simply to eliminate one more variable in case there are problems. I've just started collecting my waste oil and my first batch has a lot of suspended water in it, it looks like carmel. I don't even know if this oil is saveable. It's about 30 gallons, needs to settle and be dewatered. This will take at least 2 weeks and I will need some fuel in the meantime.

This brings up something I thought about before I purchased my kit. What if I need to drive accross country and don't want to "dumpster dive" for oil. How do I get fuel for my car? The answer: refuel at Costco or get oil from a resturant supply store (Smart & Final), etc. If I don't want to do that I can turn off my Vegtherm and put diesel back in my stock tank when it is almost empty and I still have some driving to do.

Yes my other car is a SUV.