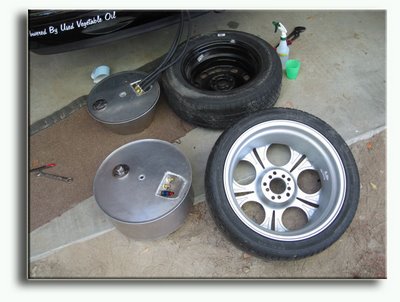 Yesterday I swaped out the 2 gallon diesel tank for the 4.6 gallon (5 gallon) tank that Plantdrive sells and I think recommends for the Passat dounut tank option - bigger car = less gas mileage. Anywho Plantdrive has been fantastic with helping me sort this out. Due to a misprint on the web page, I orderd what I thought was a 3.75 gallon dounut tank. It arrived and looked small but I've been fooled by capacities before & didn't think much of it.

After the first few drives in the car I thought I would check the level in the dounut tank, remember there is no gas gauge on the small tank. I was surprised to find that the gas level was lower then I thought it should be. My Jetta for whatever reason, gets lower gas mileage then other Jetta's I've read about. The drop in diesel level made me think that perhaps it was a 2 gallon tank because someone had mentioned in their email that they has a 2 gallon. 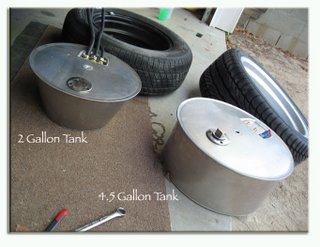 town and the purging that was required. I sometime didn't even switch over to VO on the really short trips.

This is what I'm talking about with the learning curve. I've since developed a style of driving (or I should say VO switch over) where I am not purging as much. I still wait till the engine gets to temp before swicthing to VO but I do not purge everytime I stop the car as I initially did. As I've mentioned elsewhere on the site, it's just not practical. I've also shortened my purge time to around a minute. Through these techniques I've mentioned to make the 2 gallon tank alittle more practical but still the 4.6 gives me much more piece of mind (plus I don't have to worry about my wife running out of gas when she drives the car).

Don't hold me to it but I think the cost is the same for the 2 gallon or 5 gallon dounut tank. However the additional cost comes with the fact that you have to purchase (unless you have one already) a 17" low profile wheel and tire combo to accomodate the 4.5 gallon tank.